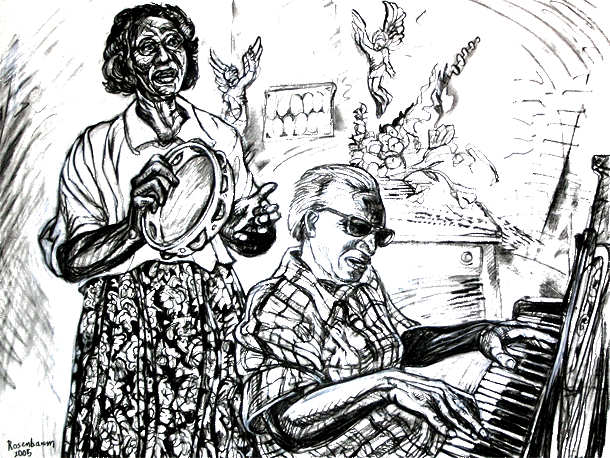 FEATURED PERFORMERS: Click on the names below for film clips and bonus material.

97-year old blind gospel singer Fleeta Mitchell still sings old spirituals and gospel songs and plays piano vigorously; and she recounts vivid memories of her late husband, whom she met at the Georgia School for the Blind. In home and at church Mother Mitchell is joined by other singers including her close friend, Rev. Willie Mae Eberhart of Athens.

Rev. Willie Mae Eberhart of Athens, is a powerful singer and eloquent speaker on faith, and on the overcoming of oppression.

The film also includes archival footage of Maybel Cawthorn, a banjo picker who served hard time in her 80s for selling marijuana.

Mary Lomax, an octogenarian of Habersham County, is arguably the finest traditional unaccompanied American ballad singer to emerge in the 21st century, having learned her songs and ballads, some 300 years old, from her father as a child.

Bonnie Loggins, is not only a singer but a maker of songs and poems, and a fine and idiosyncratic self-taught painter.

The Myers Family and Friends, a Blue Ridge Mountain group that has continued a tradition of family and neighborhood music-making.

Ed Teague currently plays with The Myers Family and Friends and shares his perspective on the role of women in preserving traditional music.

The film includes archival footage and photographs from a visit to the Blue Ridge Mountain farm of the musical Eller family.

The film includes archival recordings and photographs of Doc and Lucy Barnes.

Sing My Troubles By

A film by Neil Rosenbaum

This feature-length documentary honors older Georgia women who treasure and continue to perform the gospel, blues, mountain music, and ballad traditions they grew up with.

Folklorist and artist Art Rosenbaum visits the women (and some men!) in the homes and churches where their music lives on. These visits reveal not only the music, but also the memories and life experiences of these grass-roots singers and musicians.

On seeing the film–in which he appears–traditional north Georgia banjo picker Ed Teague said, “Some people like to ‘jelly it up’, this [film] is more natural, this is what it ought to be…it’s telling the story…If there was something that was wrong, I’d tell you right straight out.”

This final version was shown at Ciné in Athens, Georgia in December 2010, and many of the singers and musicians featured were in attendance. Earlier cuts of “Sing My Troubles By” have been shown at venues including the Albright-Knox Gallery in Buffalo, New York and the Center for Documentary Studies at Duke University, as well as Emory University. After the latter showing, Professor Daniel Barber commented: “The film casts a subtle and complex light upon people and ways of living too often generalized about and fuels a strange kind of love of life and art.”

“The mere idea of drifting into a tiny dot on a map and capturing raw talent and passionate wisdom on tape is an enchanting romance.” -M. Wehunt, Flagpole Magazine

Read More
Art Rosenbaum discusses his documentary, “Sing My Troubles By,” in this segment of his weekly radio program, “Backroads and Banjos” on AM 1690 (Atlanta).